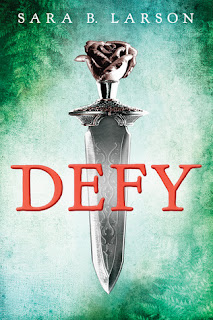 Blurb:
"Alexa Hollen is a fighter. Forced to disguise herself as a boy and serve in the king's army, Alex uses her quick wit and fierce sword-fighting skills to earn a spot on the elite prince's guard. But when a powerful sorcerer sneaks into the palace in the dead of night, even Alex, who is virtually unbeatable, can't prevent him from abducting her, her fellow guard and friend Rylan, and Prince Damian, taking them through the treacherous wilds of the jungle and deep into enemy territory.The longer Alex is held captive with both Rylan and the prince, the more she realizes that she is not the only one who has been keeping dangerous secrets. And suddenly, after her own secret is revealed, Alex finds herself confronted with two men vying for her heart: the safe and steady Rylan, who has always cared for her, and the dark, intriguing Damian. With hidden foes lurking around every corner, is Alex strong enough to save herself and the kingdom she's sworn to protect?"

Review:
You ever read a book and have so many torn feelings?  Yeah, that's this book for me.  I'm just going to hop right into in and try to work it out for myself.

1.  The characters.  The characters are very well formed for the length of the book (336 pages), especially the MC: Alexa.  She's spent the past three years hiding her true self and she has these great moments when she's given the chance to be herself where she questions if she even knows what she is like anymore because she's been pretending for so long in such a crucial developmental period of her life.  Those moments were some of my favorite in the whole book.  Unfortunately, the development drops precipitously from there.  One of her potential beaus, Damian, is the best out of all of the supporting characters (we get a little backstory and a little bit of feeling) but the rest of the characters didn't have enough time to grow.  Like I said, this book is pretty short by fantasy standards (it could have added another 50 pages for depth, easily) and as a consequence, the characters take the backseat to the plot.

“True beauty is what lies inside of us, not what the world sees. A beautiful shell that houses a vile soul becomes sullied over time. But an outer shell, imperfect as it may be, that houses a beautiful, shines with that beauty, radiating it for all who have eyes to see.”

2.  The plot.  I'm a little torn here too.  On one hand, the plot is very engaging and left me on the edge of my seat throughout (read it in one sitting).  However, the whole thing just felt... convenient.  Certain revelations were made throughout to advance the plot that didn't necessarily have any sure footing or set up in the beginning of the book.  If you've ever heard of Chekhov's gun theory, you know what I'm talking about.  If you hang a gun on the wall in the first act, it should go off in the next act.  Similarly, if a gun goes off, you should have introduced it before.  I just felt like the author was pulling a little bit out of the air as a certain way to take the story occurred to her.  So while I did like the overall direction, the way I got there was a little meh.  I'd also like to take a moment to mention the ending.  I loved the ending itself; it really wrapped things up while keeping them open just enough for the next book in the series.  However, I felt like it all happened so fast.  There was so much time for the build up (over half the book, really) and then it was all resolved within 50 pages.

3.  The romance.  Yet another element I'm torn about.  There's a love triangle in this one (as it alludes to in the blurb) and normally, I'm staunchly against any mention of love triangles.  I'm not overly opposed to it's use in this book just because of how it was handled overall, but it also meant that a large part of the plot structure was the romance and y'all know how I feel about romance plotlines.  It started to take over, especially in the middle of the book and I found myself souring to it's use.  Still, in the end, it was tolerable.

“You knew I was a girl and you still came out to talk to me in the middle of the night without a shirt on?" I shot right back. "You did what?" Rylan cut in, his eyes wide.”

4.  The world.  This was just okay.  There were some great world building moments in terms of the relationships between the people (especially between the kingdoms involved in the conflict) but I would have loved a map.  To that point, I would have liked more physical description.  It's apparently warm and there's a jungle and there are caves, but I couldn't picture any of it.  It was there, but it didn't color most of the story.

“I didn't care how handsome he was or how he made my heart race, the next time that he came to drag me out of my tent in the middle of the night, I was rolling over and ignoring him.”

5.  Some moral complications (minor spoilers ahead in this section).  There are a few things that bothered me about this book that are entirely personal preference (mostly) but I really didn't want to let this opportunity to talk about them pass.  For example, there are only two more prominent female characters: Alexa and Lisbet.  Seeing as it's a male-dominated world, I can stomach that.  However, why is it that the only female fighter is so good because she has an inherited gift from a male relative?  And why is the only other female a sorcerer who is good at healing?  Why is it that the female magical people are always healers?  Also, why is it that there was this perception that after Alexa revealed she was a girl, people were treating her with more gentleness?  And also how she herself said "Just because you admitted you know I'm a girl doesn't mean you need to treat me like one"?? This book just fell into some stereotypes that I thought YA Fantasy had left behind.  This was published in 2014, though, so maybe my expectations for gender equality should be a little lower?

“Those who truly love you will only ever see you for what you really are.”

The Final Verdict:
A mildly good start to a series.  More depth is definitely needed.
3 stars

Will I continue with the series?
If I see the next book in the library, maybe.  I don't know, I just have so many other series' I want to get to...
Posted by Laura @BlueEyeBooks at 1:00 AM

Email ThisBlogThis!Share to TwitterShare to FacebookShare to Pinterest
Labels: 3 star, fantasy, romance, YA