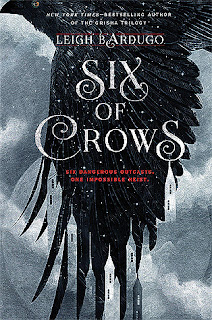 #1 of a duology (to date; a third novel is reportedly in the works)

Blurb:
"Ketterdam: a bustling hub of international trade where anything can be had for the right price–and no one knows that better than criminal prodigy Kaz Brekker. Kaz is offered a chance at a deadly heist that could make him rich beyond his wildest dreams. But he can’t pull it off alone…A convict with a thirst for revenge.A sharpshooter who can’t walk away from a wager.A runaway with a privileged past.A spy known as the Wraith.A Heartrender using her magic to survive the slums.A thief with a gift for unlikely escapes.Six dangerous outcasts. One impossible heist. Kaz’s crew is the only thing that might stand between the world and destruction—if they don’t kill each other first."

Review:
How have I not read this before??  I was a little spooked by the intense fandom surrounding this but I needn't have been worried because OMG it totally lived up to the hype.  Honestly, I'm so pumped to read the next book and for the Netflix series to come out!  Side note: this is my first true five star read of the year!

“Kaz leaned back. "What's the easiest way to steal a man's wallet?"

"Knife to the throat?" asked Inej.

"Gun to the back?" said Jesper.

"Poison in his cup?" suggested Nina.

"You're all horrible," said Matthias.”

1.  The characters.  I loved each and every one of the characters.  There are six main characters (Inej, Wylan, Kaz, Jesper, Nina, and Matthias) and by halfway through the story, I felt like I could connect with each and every one.  As it's hinted at in the blurb, they all come from wildly different backgrounds and have a range of abilities and psyches.  There is so much character building accomplished within the 465 pages.  Their relationships with each other are equally well-built and I absolutely lived for their scenes together.  One of the hallmarks of this book is the multiple POV's.  With the six characters, comes six regular POV's (separated by chapter breaks).  This was such an excellent choice made by the author as each POV is perfectly differentiated based on the character and I could connect with them all faster and more deeply.  One small grievance: I felt that generally the ages of the characters were just a touch too young.  Personally, I pictured them all in their early-mid 20s but really, that tends towards personal preference.  Overall, Kaz is my heart and soul but Inej is definitely my favorite character.

“It's not natural for women to fight."

"It's not natural for someone to be as stupid as he is tall, and yet there you stand.”

2.  The plot.  To be perfectly transparent, I actually didn't read the blurb before diving into this book.  All I knew is that there was a character named Jesper and it involved something about an unlikely group of people.  After only a few pages in, I was blown away by the concept and how well it was molded.  I've never read a fantasy book that uses a heist as it's main plotline and I fell in love with the whole idea.  It's executed flawlessly and kept me interested to the last page.  Seriously, I was going to read it all in one night but soon it was two am and even bookworms need to sleep sometime.  As far as the structure goes, there's the overall plot of the heist interspersed with microplots.  At the end of the book, there is this perfect transition into the larger plot line that will extend through the next book (can I just say, I'm so excited to finally be reading a duology as it'll hopefully avoid any traces of middle book syndrome).  I was reading the acknowledgements and so many of the books Bardugo used for research sound so interesting to me so I'll definitely be checking those out.  Overall, if you love fantasy and heists (think The Italian Job or Ocean's Eleven), this is the one for you!

“No mourners. No funerals. Among them, it passed for 'good luck.”

3.  The romance(s).  Yet another piece I adored.  There's enemies to lovers, unworthy love (is there a better way to say this?  I cannot, for the life of me, think of the other name...), and a teeny bit of LGBT+ rep represented and I loved every minute.  They're all (three total) very much tailored to the world in which they occur and factor in the circumstances and the atmosphere of said world.  This is something that's so underappreciated in novels but making sure the romances aren't just whimsical contemporaries inserted into a fantasy setting is essential.  Bardugo does a great job of incorporating the romances so they both color the characters' actions and are colored by the setting itself.  One tiny irritant: why do they all have to pair off, though?  I was thinking about this as I was reading Sarah J. Maas' Kingdom of Ash.  Why is it that fantasy characters always pair off?  At least one platonic relationship please!  With that being said, I loved each of the romances and they played off each other very well.  As a bit of a side note, only one of the romances is fully present while the rest are just hinted at.

“Many boys will bring you flowers. But someday you'll meet a boy who will learn your favorite flower, your favorite song, your favorite sweet. And even if he is too poor to give you any of them, it won't matter because he will have taken the time to know you as no one else does. Only that boy earns your heart.”

4.  The world.  I don't really have that much to say about this element other than it is lovely.  To be honest, the world doesn't stand out as much as the characters and the plotline do which is perfectly okay.  This isn't an aromatic book by any means and the richness comes from the characters and their mission.  However, the world is present and memorable as it plays into the story.  There's also a map at the beginning so what's not to like?

“When everyone knows you’re a monster, you needn’t waste time doing every monstrous thing.”

Will I be reading the next book in the series?
Um yes now please!  You can bet I'll also be splurging on the box set.

Are you part of the horde that has already read this?  What did you think of it?  Who is your favorite character in the group?
Posted by Laura @BlueEyeBooks at 1:00 AM

Email ThisBlogThis!Share to TwitterShare to FacebookShare to Pinterest
Labels: 5 star, fantasy, romance, YA