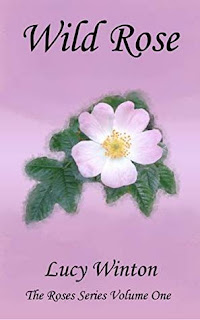 
Blurb:
"Milly Costello has lived in the walled city of Redcross for two years. She wants nothing more than to get out - but when the mysterious Wolf-Lords arrive, she may get her wish in a way she doesn't expect. And that's to say nothing of the secret she and her friends are keeping..." 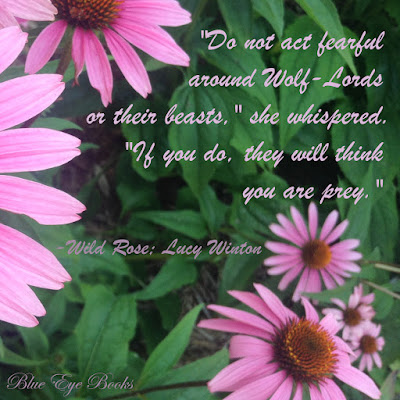 
Review:
Thank you to the author, Lucy Winton, for gifting me with a copy of Wild Rose.  All opinions expressed are my own.

1.  The characters.  Let's begin with the cast of characters.  I was very impressed by the author's ability to incorporate so many characters into such a small book (197 pages).  There are the characters in the city of Redcross (the main setting) including our main character, Milly, her friends Frankie, Sami, and Avrel, their boss Carlene, the runners Jason and Leo, as well as a few others.  When Milly makes her journey with the Wolf-Lords, we're introduced to several of them in detail.  All in all, there are at least 15 characters, all fleshed out to differing extents.  With all those characters, however, comes the need for equitable amounts of page time to get to know them individually.  Unfortunately, because of the length of the book, I felt like I could only slightly grasp the inner personality of Milly and none of the other characters.  Good foundations were laid but differentiating the characters from each other proved a daunting task, at least for me.  Milly's development throughout the course of the story was really rather nice and her transformation, though mild, is a good amount in terms of a YA novel.

2.  The plot.  There are a couple of interweaving plot lines throughout the story.  Without going into too much detail, essentially Milly leaves Redcross (the main city) with the Wolf-Lords and her friends stay and deal with a choice they made in the past that is affecting their present.  These two main plotlines are given pretty equal page time to allow them to develop independently before they meet again at the end of the novel.  This is one of my favorite plot structures because of the way the plots diverge and them merge again.  All throughout the middle, there's an uncertainty of whether the two will ever connect again and you're wondering how it all fits together, a bit like a mystery novel.  At some points, it felt as thought the small conclusions and revelations throughout the novel were anticlimactic and turned out to be smaller than I anticipated they would be.  It's not that the revelations were small things, just that they were implicitly presented that way which made me question their significance.  It's like if someone tells you for months that there's something amazing that they absolutely have to show you and then the time finally comes and they spend one minute showing you how they learned how to time travel and then never speak of it again.

3.  The world.  Overall, I really enjoyed the world that the author built in this novel.  While I would have liked more page time dedicated to clarifying the specifics, the broad strokes given, supplemented with the character's manner of speaking (etc etc), were enough for me to form a general understanding.  In this world, there are open towns and walled cities because of the history of the various territories and the wars between them.  Each place that the reader visits with the characters has it's own culture and feel which is especially enriching (the Wolf-Lords live in a cold, rather insular community with old traditions, the people of the Gull Islands treasure the sea and nature, etc).  There were a few inconsistencies that I wondered about.  For example, at one point, Milly sends a paper message to be 'passed along' but later in the story, phones are used.  Certainly these two things can exist in the same society but there was a lack of explanation regarding some of these smaller instances of world-building.  As I've mentioned before in this review, this could certainly be remedied by a longer page count.

4.  The romance.  There are two central romances that make a very brief appearance (both traditionally heterosexual) but they didn't form even a minor plotline which I found particularly refreshing, especially in a YA fantasy.

The Final Verdict:
A refreshing, quick, and easy YA Fantasy with an engrossing plot structure.  A low page count lends itself to slightly underdeveloped characters and world-building.
3.5 stars
Posted by Laura @BlueEyeBooks at 1:00 AM

Email ThisBlogThis!Share to TwitterShare to FacebookShare to Pinterest
Labels: 3.5 star, fantasy, YA