Just After the Fall by Eric James-Olson 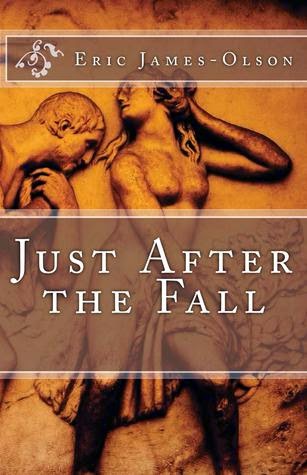 Thank you to the author Eric James-Olson for a free copy in return for an honest review!

I just learned 10 minutes ago that this is the 3rd book in a series.
Blurb:
Before the destruction of Farm-Colony 984, Lawrence and Maria were security guards, lovers, inseparable companions. Maria was positioned in the Main Building during the attack. Lawrence watched the building explode. He watched from a distance and there was nothing he could do. In, Just After the Fall, Lawrence is thrown into a hostile wilderness pursued by Armored Drone Soldiers, befriended by the savages he was trained to kill, and haunted with doubt as to whether Maria was really there when the farm went up in flames. Just After the Fall is a story of betrayal and redemption. It is a story of love and searching for those left behind. Just After the Fall is a novel that exists within the same world as the novels: But the Angels Never Came, Farmers and Cannibals, Whom Cain Slew, and Short Stories from the Year 2065 and the Decades that Followed. The books and stories are written to be read in no particular order. Each story reveals more about the characters during different times in their lives. The roles of the characters are different in each narrative. The protagonist in one may be a minor character in another. Just After the Fall features the characters Lawrence and Maria.

This book was... strange.  Not a bad strange though.  Just a... different strange.  Think a variation of Brave New World.

So I didn't know this was part of a series when I first started reading it.  So while I was reading it, I was thinking "where's the world-building?!" because there was pretty much nada in the whole book (there was... 2 chapters I believe).  Buuuuut, now that I know that, I think I can reasonably assume there is some world-building in the other 2 books.

The biggest reason I rated this 3.5 stars is because there didn't seem to be a main plot.  There were plenty of co and sub plots but there wasn't a dominant one.  Now some people may like this kind of thing.  Me?  I find it hard to focus on the book then and it isn't as intense for me.  So there's that.

The other reason is the flow was kind of... I don't know... off?  There was a bunch of jumping backward and forward in time which sometimes made sense and sometimes didn't.  The one time change I enjoyed was when it would switch back to the lecture hall scene after or before an important scene in the 'present'.  This gave a lot of meaning to the book and made a lot of things about their society and just about the book's message clearer.

So overall, this is a good book, just not really my cup of tea.  But as you know, I don't base my ratings solely on whether I like it or not.  The writing really was very good as well as the message which is what will matter to all you in the long run!

“'It was a lie,' he whispered. He said this to himself and he said it again with growing intensity, 'A lie. A lie! It was all a lie!' he shouted with his head tilted back, and his eyes wild with savage fervor."

“'I know I know. Even if there were a million other women.'
'That’s right now, you hear. Even if there was a million girls, I’d be lookin’ at you.'
'Silly man.'
Lawrence put his arm around Maria as they continued down the trail."

'When we first came to the wilderness there was only survival. There was no right or wrong. We had nothing. We knew nothing. In the wilderness,' Chet laughed, 'the moralist is the first to die. But Abraham brought our morals back to us. He brought law and order. He brought a belief, a shared goal, a reason to live. For that I forgive him.'"
Posted by Laura @BlueEyeBooks at 5:39 PM