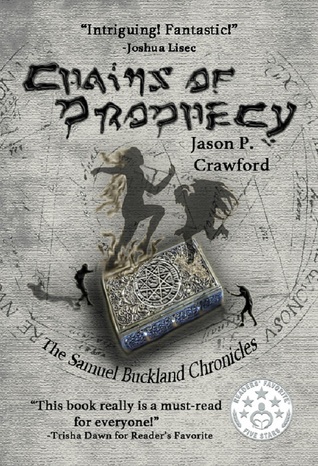 Goodreads Blurb:
"Samuel Buckland is a young man who has it all and is planning for the future. Gregory Caitlin is a businessman and politician. He has designs to bring hope back to a world in need...and he'll be damned if anyone gets in his way!
When the two cross paths, even the angels tremble. An ancient magic has been rediscovered. Sam must overcome his lack of faith and accept his destiny, or the world he knows will suffer the consequences. . A skeptic who must harness the powers of demons and genies. A zealot who has begun to walk a darker path. Bound together by a stolen secret. Can any of them escape the Chains of Prophecy?"

Review:
Thank you to the author, Jason P. Crawford, for gifting me with a copy of this book in exchange for an honest review!

This is certainly one of those hidden gems!  Like The Truth About Drew, this book is slightly religious although you can look past it if you choose.

The plot kept me glued to the page until I finished!  It was so interesting to see the perspectives of two people who both thought they were doing the right thing (one was under an influence but still...).  You don't see that very often.  You see villains but they are always so obviously evil and twisted and one person is so obviously 'good'.  In this book, the concepts of good and bad are exposed as the perceptions they are.

I also really liked how the angels were interpreted.  They were traditional angels yes but Mr. Crawford introduced some new elements that I never thought about before.

I do wish that there was a sort of montage or something to show how Samuel actually learned all the spells and gestures.  It seemed like all of a sudden, he was a master at it and I'm not entirely sure how that happened.

The Final Verdict:
I simply loved the plot of this book and the two 'good guys' who were pitted against each other.  It's such a fascinating concept to me.  I could have used a bit more about the book and Samuel and how it all worked.
4.5 stars

Quotes:
"'She passed on the knowledge when it was time, as has been necessary since the Arts were given to Mankind.' He shrugged"

"'Do you want proof?' His eyes held no more of the childish innocence he had pretended, and the wisdom of untold millennia echoed in their depths like ripples on a dark pool.  'I don't think the flaming sword would be appropriate, here.'"

"'Angels are servants, not kings.  Not rulers.  Those that forgot this are in Hell, and no longer counted among us.'"

"'Very well, young Buckland; you may wish to cover your ears.'  The djinn inhaled, frost forming on it ephemeral lips, then spoke.  The words erupted like a close-range thunderclap, a sonic boom, and the sky outside rumbled and roiled in response; clouds boiled from nowhere as the djinn's name echoed from the mountains.  Sam pulled his hands from his head. 'Alright then.  Sky-King it is.'" 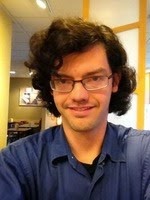 Jason Patrick Crawford is a 33 year old high school science teacher and father of three children who came into writing at the urging of his family. He discovered a primal joy in the act of creation that he had never experienced before. He has also learned of the amazing community of authors he has joined and is proud to be counted among their ranks.Jason's first published work, Chains of Prophecy, is available in most e-book formats. He had the idea for this novel several years ago when he was getting his teaching credential, but had no idea at the time how to make it work. His inspiration for his writing practices is the great Stephen King; his memoir On Writing was an amazing resource and really helped jump-start Jason's work.If you would like to speak to Jason, you can e-mail him at jasonpatrickcrawford@gmail.com or message him on Twitter at @jnewmanwriting. He will be glad to answer as soon as he can!

1. Have you always wanted to be a writer?
No, writing is actually a recent thing for me. I started in the fall of 2012 with my wife and sister-in-law as an informal, “let’s write” kind of thing…and I went nuts. I read Stephen King’s “On Writing” and found the confidence to write that first book…and then the next…and then the next.

2.  How would you describe Chains of Prophecy in three words?
Destiny or Choice?

3.  What is your favorite part of the writing process?
Actually doing the writing. I love it when the characters surprise me and take the story off in its own direction.

4.  Where did you get the inspiration for Chains of Prophecy?
The roleplaying game Ars Magica. It has a style of magic based on King Solomon. Mine is nothing like that, but it got me thinking – what if that were present today?

5.  Do you have a certain amount of pages you write everyday whether it be relevant to your current project or just random stuff?
I try to write at least 1000 words a day. It’s never random stuff – I only count working on my novels or short stories as “writing.”

6.  Do you prefer to type or hand write?
My fingers keep us more easily with my brain when I’m typing, but sometimes handwriting can be a refreshing change. Normally I type.

7.  Do you base your writing on people and experiences in real life or do you like creating from scratch?
Not usually - I prefer to create the characters. Well, I suppose I should say they create themselves. All I know when I start is a basic idea of who the character is and what the central conflict of the story is. After that, it’s all them.

8.  How would you describe The Drifter in three words?
Epic-scale fantasy.

9.  Where did you get the inspiration for The Drifter?
From the RPG Nobilis – beings that embody concepts are fascinating because of the inherent conflict between the human desires and the desires of this strange, elemental force.

10.  Any advice for aspiring writers?
Write. Read. Write. Read. Repeat. Everything else is secondary. Once the work is on the page, you can fix whatever’s wrong with it.

Posted by Laura @BlueEyeBooks at 4:00 PM