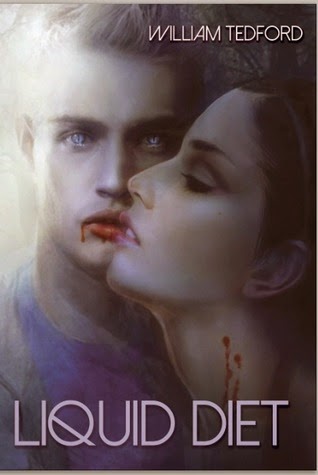 Goodreads Blurb:
By day, Melissa French seems like an ordinary teenage girl, but when her infatuation with Troy Davidson turns into a dangerous obsession, she begins to stalk him through the night on the hunt to uncover his darkest secrets. Little does she know that the two of them are more alike than she ever could have imagined.Melissa follows Troy into an abyss of pain and pleasure as she attempts to quench her thirst for blood while hiding her true nature from the rest of the day world. Soon, her dreams turn into a grotesque reality as she is caught in a web of ancient history, lies, and manipulation. As her thirst begins to take control, Melissa is faced with the challenge of her life and must fight for her survival—and the survival of the vampire race.

Thank you to Whitney Martin on behalf of the Zharmae Publishing Press for allowing me to read and review this book!
Liquid Diet almost reminds me of a horror story. Just the ideas that are presented are horrific in nature. I mean it does belong to the horror genre but you know what I mean! The thing I liked about it though was now it was presented in the book. It wasn't thrown in your face how horrible the situation is and how everything is terrible. It's just given to you as if it resembles normalcy. I've never really seen that done before, how characters can be so panicked about the situation and still accept things and not totally freak out.
Second thing - if you're touchy about reading books about lust or sex, I wouldn't recommend this. William Tedford's kind of vampire's are... definitely different than Stephanie Meyer's type of vampires. However if you're up for it, this is such an intense book and the pages just fly by. Mr. Tedford's vampire's are darker, more mysterious, and just more in tune with our animal side. They aren't human and he doesn't try and make them out to be.
Third thing - the ending. I loved the ending. I don't want to spoil anything but it ended with a sense of recurrence. Of cycles. If another book ended like this one but without that sense, I would have desperately begged the writer for a sequel. But for this book, it connects with it's ancient heritage and you understand what comes next without it having to be spelled out for you.
The one thing I disliked about Liquid Diet was the middle part when everything was escalating. Again, I'm trying not to spoil anything so I'm sorry if I'm being cryptic! It went from small problem to all of a sudden the whole town is gone. It just seemed a little sudden.
Along those same lines, I just loved the overall shape of the book. How it started by pinpointing one hitchhiker and widening the range gradually until at the end we learn of the whole society. It wasn't thrown at you, you were eased into it.
Liquid Diet was definitely a page-turner for me - 4 stars!
Posted by Laura @BlueEyeBooks at 10:05 AM