Review and Release Tuesday: Everywhere You Want to Be by Christina June 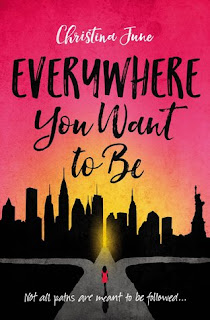 Companion to It Started With Goodbye (don't need to read in order)
Released: May 1st, 2018

Blurb:
"From author Christina June comes Everywhere You Want to Be, a modern tale inspired by the classic Red Riding Hood.Matilda Castillo has always done what she was told, but when she gets injured senior years, she watches her dreams of becoming a contemporary dancer slip away. So when Tilly gets a once-in-a-lifetime opportunity to spend the summer with a New York dance troupe, nothing can stop her from saying yes--not her mother, not her fears of the big city, and not the commitment she made to Georgetown. Tilly's mother allows her to go on two conditions: one, Tilly will regularly visit her abuela in New Jersey, and two, after the summer, she'll give up dancing and go off to college.Armed with her red vintage sunglasses and her pros and cons lists, Tilly strikes out, determined to turn a summer job into a career. Along the way she meets new friends ... and new enemies. Tilly isn't the only one desperate to dance, and fellow troupe member Sabrina Wolfrik intends to succeed at any cost. But despite dodging sabotage and blackmail attempts from Sabrina, Tilly can't help but fall in love with the city, especially since Paolo, a handsome musician from her past, is also calling New York home for the summer.As the weeks wind down and the competition with Sabrina heats up, Tilly's future is on the line. She must decide whether to follow her mother's path to Georgetown or leap into the unknown to pursue her own dreams."

Review:
I received a copy of this book from Blink publishing.  All opinions expressed are my own.

This turned out to be the perfect weekend palate cleanser for me.  I've been rereading so many fantasy books that I haven't wanted to read anything.  I picked this up on a Saturday afternoon and it just reinvigorated my reading brain!  To that end, while I did enjoy every minute, I found it slightly forgettable.  Allow me to explain.

1.  The characters.  So this is a companion novel to Christina June's debut, It Started With Goodbye, and while they don't need to be read in any particular order, I think it definitely increased my enjoyment to have previous knowledge of the two sister's relationship (It Started With Goodbye is Tatum's story and this novel is her sister's story).  I have to say, I enjoyed the banter so much in the book!  I found myself laughing out loud on numerous occasions (so it's probably a good idea that I didn't read it in public!) and I think I'm going to reread it for that aspect alone.  Matilda (Tilly) and her roommate have such well written scenes together and I really felt like I got to know them through the course of the book.  I'm really glad the author took some time for Tilly's antagonist to explain her reasons and develop as a character instead of just running with the 'mean girls will be mean' attitude.

2.  The plot.  This was also very well done.  Tilly is recovering from an accident where she broke her ankle and she's chasing her dream of being a dancer.  With that industry, comes the inevitable mean girls and performance stress.  I don't really know anything about dancing and I found it to be immersive without being overly technical which is definitely a good thing if you're like me.  The way Tilly dealt with her problems was also superb and well thought out.  Typically, I get frustrated by YA contemporaries because the characters make the strangest decisions but I identified with Tilly extremely well and I found her struggles interesting and absorbing.  Overall, the light and contemplative plot made for a quick and easy read.

"Emotion-power-exploded through my limbs, forcing me through the motions until time and music and movement began to blur into pure freedom."

3.  The romance.  This was by far one of my favorite elements.  One of the main reasons why I don't read YA contemporaries (or contemporaries in general for that matter) is because the romance is always so predictable and slightly insta-lovey and it has a tendency to take over the plot.  However, this romance was just so perfectly balanced and it was also handled in such a mature way.  To avoid spoilers, I'm just going to say that there is no love triangle (thank goodness!) and the two people involved in the romance find their way to each other in the sweetest and most well-developed way.

"All the people who loved and supported me, in a row. It was enough to put the pieces of me that seemed to be floating in midair back together into one, solid Tilly. And just in time. When the first few strains of music began, we flew. With every step, I leapt into orbit, around the moon, and then back down."

The Final Verdict:
A very solid contemporary with thoughtful themes, a well-balanced plot, light dialogue, and a strong romance.  While not my favorite, it's sure to be someone else's.
4 stars 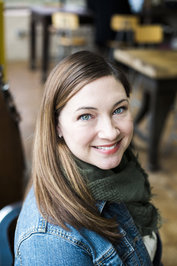 Christina June writes young adult contemporary fiction when she’s not writing college recommendation letters during her day job as a school counselor. She loves the little moments in life that help someone discover who they’re meant to become – whether it’s her students or her characters. Christina is a voracious reader, loves to travel, and hopes to one day be bicoastal – the east coast of the US and the east coast of Scotland. She lives just outside Washington DC with her husband and daughter.She is the author of IT STARTED WITH GOODBYE, EVERYWHERE YOU WANT TO BE, and the forthcoming NO PLACE LIKE HERE.